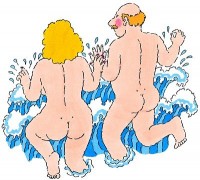 Attention!! Sometimes our swims are cancelled or moved to a different location. Please check our calendar events page or scroll further down this page to see the latest information regarding dates/times of confirmed swims.

Cost: Regular admission is $9. NIFTY offers half price swim rates to students and low income people. Children (18 years & younger) are admitted free when accompanied by their parents. Annual membership (by donation, $0 and up) required for all adult admissions. Please bring a quarter (refundable) or your own lock for the locker.

Attention Newcomers: Your first NIFTY swim is only $1. Please click on the image below, print, photograph or save the discount coupon on your smartphone or camera and present it at the next NIFTY swim. We accept the coupons on paper, digital cameras and smartphones. 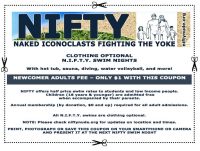 Following each swim night there is usually an optional get together for snacks at a local restaurant. Check with the front desk for location. All N.I.F.T.Y. swims are clothing optional.

OTHER SWIMS (please verify the details with the official event organizers):

Following each swim night there is usually an optional get together for snacks at a local restaurant. Check with the front desk for location. All Wreck Beach Swim Club swims are nude only. Visit the Wreck Beach website for more details: http://www.wreckbeach.org/swim.html

All Skinnydipper swims are nude only. Visit the Skinnydipper Nude Recreation website for more details: http://www.skinnydipper.ca/ 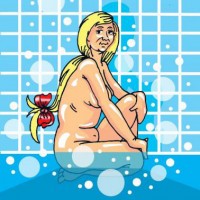 Permanent link to this article: http://niftynude.org/swims/