NIFTY events are clothing optional, but here’s a great chance to have a sauna in the traditional manner – NUDE! This is a family event and just like at Wreck Beach, normal, respectful behavior is expected at all times. So please bring your kids if you like (there’s a children’s pool there too). We keep it safe and accountable for everyone’s safety! 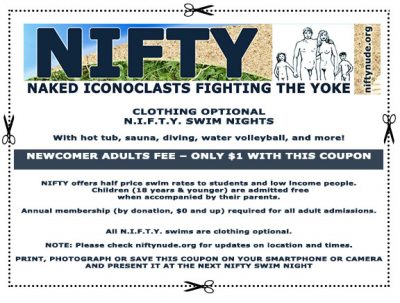 See you at the swim!

Permanent link to this article: http://niftynude.org/swim-schedule-changes-in-2014-2/


Every Body is Beautiful


Girl Walks Around NYC With No Pants! (video)


Say NO to the Legal Ban on Public Nudity!


Your first NIFTY swim is only $1!


A nudist never has to hold out his hand to see if it is raining!


TOPFREE IS LEGAL IN B.C for both sexes!


My Mommy Is Beautiful! (gallery)